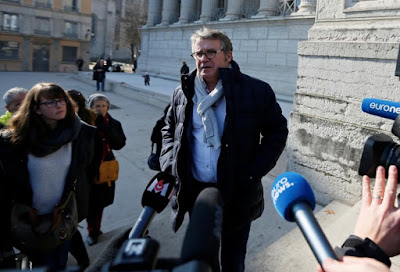 LYON, France (Reuters) - A decade-old lawsuit in which a French farmer with neurological problems accuses Monsanto of not providing adequate safety warnings for a weedkiller returns to court on Wednesday, adding to health claims faced by the Bayer-owned firm.

Paul Francois, who says he fell ill after inhaling vapor from weedkiller Lasso in 2004, won rulings in 2012 and 2015 that found Monsanto liable for the intoxication, before France’s top court overturned those decisions and ordered a new hearing.

An appeal court in the southeastern French city of Lyon will hear arguments on Wednesday before giving its verdict at a later date.

Francois, who says he has suffered memory loss, headaches and stammering, blames Monsanto for not giving sufficient warnings on the product label.

“Maybe we’ll lose against Monsanto but the real victory for me is that I have converted my 200-hectare farm to organic production,” 55-year-old Francois told reporters before the hearing.

“This affair made me open my eyes and move towards a different kind of agriculture.”

Lasso was banned in France in 2007 after the product had already been withdrawn in some other countries.

• Read more of this story from Reuters

• France 24 coverage of this story

• More coverage
Posted by Pam Strayer at 9:32 AM